Ajit Agarkar retired as a fast bowler of the Indian cricket team has unique records under his name  Ajit Agarkar scored a triple cent...

Ajit Agarkar retired as a fast bowler of the Indian cricket team has unique records under his name Ajit Agarkar scored a triple century in the Under-15 matches.  it may be surprising for you that based on domestic cricket batting performance he was selected as a middle-order batsman in debut match Agarkar completed half-century against Zimbabwe in 2000 in just 21 balls.
Agarkar was also considered to be a complete all-rounder for the Indian cricket team after Kapil dev if we talk about his bowling performance then Ajit Agarkar had completed the fastest 50 wickets in 23 ODI matches. In 1998 Agarkar broke the world record of Australian bowling legend Dennis Lillee's
Former Indian team fast bowler Ajit Agarkar took 288 wickets in 191 ODIs for India. before retirement Agarkar become the third successful bowler from the Indian cricket team after Anil Kumble and Javagal Srinath. cricket fans love his fast bowling and yorkers Agarkar, who was an expert in swinging the ball, for you it may be shocking to know that he wanted to become a batsman and not a bowler.

Ajit Agarkar was called the next Sachin Tendulkar of India in the under-16 domestic cricket. Then suddenly he became a bowler and also set the record for taking the fastest 50 wickets in ODIs. However, This record was later broken by Ajanta Mendis of Sri Lanka he took 19 matches to complete 50 wickets in ODI.
Ajit Agarkar and Akash Chopra brought back memories of the Under-16s. Akash said, "When we came from Delhi to the north zone, we were told that look there is a player who is Sachin. Plays like Sachin  Tendulkar and he has also given him his cricket pads. Agarkar is going to be the new Tendulkar."
Agarkar said, "Every cricket expert said that Agarkar is going to be a batsman."  coach  Ramakant Achrekar saw fast bowling talent in me. Achrekar sir was famous for providing cricket coaching to Sachin. In school cricket matches, I used to open innings for the team. Therefore, such reports surfaced in media that Agarkar is going to replace Sachin Tendulkar. Today, at the age of 16, young players are getting all attention from major cricket leagues like  IPL. ''
Agarkar further said, "Sachin and I belonged to the same school. Sachin gave me cricket gloves. I later changed school to learn cricket from coach Ramakant Achrekar.
IPL has changed the cricket and now cricket fans support a player because of the franchise he is playing or part of not based on the nation a player represents.
Ajit Agarkar had scored an unbeaten 100* at Lord's in 2002 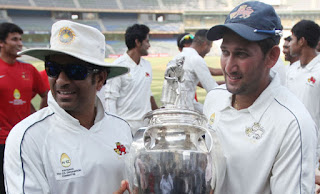