Shoaib Akhtar keeps making some statement about Indian cricket, due to which he remains in the headlines.  Now he has said a new thing which...

Shoaib Akhtar keeps making some statement about Indian cricket, due to which he remains in the headlines. Now he has said a new thing which will attract everyone's attention. Shoaib Akhtar one of the best fast bowlers has said that he open to become the bowling coach of Team India so that he can produce fast bowlers of his kind in India as well. Shoaib said this during one of his recent interviews.

Former Pakistan fast bowler Shoaib Akhtar, popularly known as Rawalpindi Express, while talking on the Hello application said that Indian cricket team has the best fast bowlers like Jasprit Bumrah and Bhuvneshwar Kumar at the moment
if he got an opportunity, as bowling coach of the Indian cricket team in the future he would definitely like to be head of the bowling coach to produce fast bowlers like myself there too. At the same time, he also made it clear that if he gets a chance to become a bowling coach in IPL, then he would like to join the Kolkata Knight Riders team.

He said that it was more difficult to get the wicket of  Rahul Dravid than Sachin Tendulkar. At the same time, he also said that Sachin and Sunil Gavaskar were great players. Shoaib Akhtar praised Team India's all-rounder Hardik Pandya and said that he has the potential to become the world's best all-rounder.
When Shoaib Akhtar was asked if he wanted to join politics, he refused and said that I am a straight-talking person and such people are not able to succeed in politics.
The world-famous rivalry between Sachin Tendulkar Shoib Akhtar said that Indians often remember the six of 2003 World Cup match between India and Pakistan.
“Although, that one six which he hit me in Centurion South Africa during the 2003 ICC World Cup as it makes them really happy. They keep showing the same six. If I knew that one six can make 1.3 billion Indians so happy, I would have conceded a six every day!”

Akhtar holds the record for bowling the fastest delivery ever scaled when he bowled a 161 kmph scorcher to Nick Knight in the 2003 ODI.

He wants Bollywood sensation Salman Khan to play the role of him in his biopic as a physique and controversial career is common. 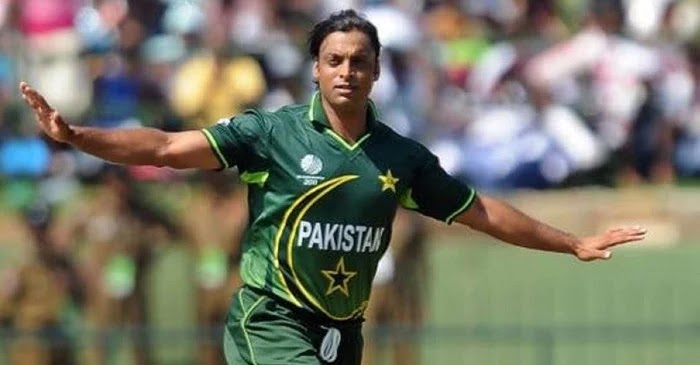