Who can break fastest 50 runs world record of Yuvraj Singh ?

Yuvraj Singh scored the fastest half-century against England in the 2007 T20 World Cup. In the same match, Yuvraj also hit 6 sixes off 6 ba...

Indian all-rounder Yuvraj Singh holds the world record for the fastest 12-ball half-century in T20. He has said that this record can be broken only by Hardik Pandya and Lokesh Rahul. During chatting on cricket website Cricinfo, Yuvraj said that this record-breaking ability was also in West Indies' Chris Gayle and South Africa's AB de Villiers. However, de Villiers has retired and Gayle can take over anytime.

Yuvraj scored the fastest half-century against England in the 2007 T20 World Cup. In the same match, he also hit 6 sixes off 6 balls against fast bowler Stuart Broad. Yuvi played a brilliant innings of 58 from 16 balls with three fours and seven sixes in the match. The Indian team then won the title by defeating Pakistan in the final.

The circumstances of the International and IPL are different.
Recently England bowler Joffra Archer asked Rahul who can break the record of Yuvi? In response, Rahul took his own name, but now Yuvi said, "Rahul can break my record." He has also scored half-centuries in 14 and 15 balls in the IPL, but let me say that both International Cricket and IPL are different. The circumstances of both are also very different. ''
Yuvraj Singh has scored 1900 in 40 Tests, 8701 in 304 ODIs, and 1177 runs in 58 T20s. He has 2750 runs in 132 matches of IPL.

"Pandya can become a great all-rounder"
Yuvi said, "I believe that Pandya also can break the record for the fastest fifty. His game is very spectacular and different. He is very hardworking and a good person. His ability to hit the ball is excellent. You do not have to take a single-double to break the record. You will need a boundary on every ball. In such a situation, Pandya has this ability. He has the qualities of becoming a world-class cricketer. Pandya could become a great all-rounder for India in the future. ''

'Not going to talk to the players in Team India'
Yuvraj, who retired from international cricket last year, also took a dig at Indian team coach Ravi Shastri a day earlier. He said that the current players of the team have no one to talk to and seek advice. When asked whether this work is not of Shastri, he said that he does not know whether Ravi is doing it or not. They may also have other jobs.

"The coaching staff should know the potential of the players"
He said that you cannot let every player go on the field and play freely. This approach can work with a player like Virendra Sehwag. But might not work with Pujara. In such a situation the coaching staff should be aware of this.
The main reason for all the controversy is in recent interview Australian  cricketer and controversial Indian cricket team coach Greg Chappel recent interview in which he told to media that he groomed and help MS Dhoni to improve the game
"Now we talked about the fact that if he (Dhoni) could learn to hit the ball along the ground as well...even though he was good at hitting boundaries, it was still a high-risk way of playing. If he could take some of that risk out of it, he could become one of the best finishers in world cricket," Chappell had said on an online chat with the PlayWrite Foundation.
"Somehow, you've got to find the thrill in being the best finisher rather than one of the best hitters of boundaries and maybe be remembered for some exciting innings, because you could become the best finisher the game has ever seen," he had said.
Greg Chappell's stint as the head coach of India was a turbulent one, ending after India's unceremonious first-round exit in the 2007 World Cup.
Several players had let their displeasure be known during his time as coach, with Chappell often chopping and changing the team and trying some radical tactics that did not work out. If you have any opinion then feel free to comment and let us know thank you for your time. 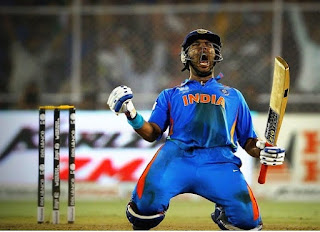