When Team India reached the finals for the first time in the women's cricket T20 World Cup, people's hopes had skyrocketed. Although...

When Team India reached the finals for the first time in the women's cricket T20 World Cup, people's hopes had skyrocketed.

Although the final was with a strong Australian cricket team, the Indian team was in full swing as they had defeated this Australian team in the first match of this tournament.
However, the Indian women's team missed making history and Australia won the T20 World Cup title for the fifth time.

The Australian women, who came out to bat first after winning the toss, made a huge mountain of 184 runs for the first four wickets and then did not let any batsman of the Indian team stay on the pitch for a long time. The entire Indian team returned to the pavilion for just 99 runs.

Indian cricket Team after match
What happened to the Indian women's cricket team, which won the first match against the Australian team and all subsequent league matches, whether bowling or batting in the tournament before the final, was one of the top performers in the title match. There is no doubt that the Australian team managed to win the final due to their experience as well as strong innings of opening pair Elisa Healy and Beth Mooney, but this is not the first time that the Indian women's team lost in the final match so close to  #JAI _Ho.

Big match mental pressure
Rajkumar Sharma, the coach of Dronacharya Award winner and captain of the men's cricket team Virat Kohli, said on this defeat of the Indian women's cricket team, "The team tried its best but the problem in the knock out match is a matter of concern. Somewhere it shows mental pressure. These players have to live up to the expectations of themselves and the people. When the whole of India was eyeing it, then the pressure to be made is shameful. M. I think the team needs to learn to work on the mental side. Suffer mental pressure of big matches. "

Rajkumar Sharma says that this defeat is quite disappointing because the Indian team had a great performance in the initial matches. Australia played better cricket and India could not stand up to it. Talking about the pressure on the team, this time before the final match, the women's team captain Harmanpreet started trending on Twitter. On Sunday, on one side there was a final match and on the other hand, World Women's Day, it was also the birthday of Captain Harmanpreet Singh. People on social media were already describing it as a double happy day. People had every hope of winning the final match.

Where did the Indian cricket team that defeated mighty Australia four-time cricket world cup champions in the group match, made a mistake in the final.

The opening batsmen contributed 83 percent (153 runs) to Australia's 184 runs. Australian opening pair Elisa Healy scored 75 and Beth Mooney scored 78 (not out). At the same time, when India's young opening pair Shefali Verma scored just 2 runs in the first over, then Jemima Rodrigues was out without opening an account. After this Smriti Mandhana could also score only 11 runs.

In the first match of the tournament against Australia, Shefali Verma scored 49 runs and Smriti Mandhana scored 55 runs.

Not only this, Captain Harmanpreet Singh's bat was silent in this big match like the rest of the tournament.

Regarding the performance of the Indian team, Rajkumar Sharma said, "The team has failed in this match both bowling and batting. The Indian team could have beaten Australia this time like in the previous match. But, the team is very much on their spinners It was more reliant and when the Australian team batted aggressively, our spinners could not stay. "

He says, "In this tournament, our spinners were not attacked by any team, the batsmen were playing in defense. But, the Australian openers changed the stand of this match and the Indian bowlers got nervous."

He says, "At the same time, there was a lack of management that it did not change the strategy of the team as per the situation. Our batsmen also came under pressure due to the big score. Senior players Harmanpreet and Smriti Mandhana could not do anything special. But the batting was completely dependent. But, hopefully, the team will not repeat these mistakes next time. " You can share this post if you like and feel to share your opinion. 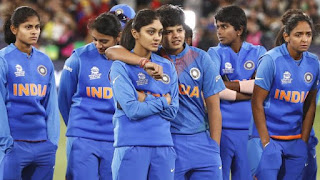